Hit enter to search or ESC to close
Sleva 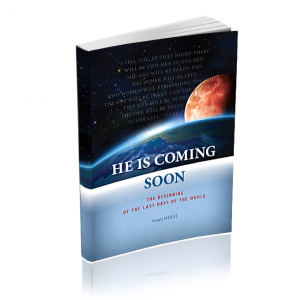 He Is Coming Soon

He Is Coming Soon
Sergej Mihál

The beginning of the last days of the world Christ’s second coming will have two phases. The first will be when He descends upon the clouds to take all who love Him to heaven. The second will take place when He comes down to earth, on the Mount of Olives, to rule the world. The first will have no witnesses; the second will be witnessed by all.
The first phase is called the rapture. So, what is the rapture? It is an event during which Christ will take all devoted Christians to the heavenly dwellings – just as He promised. This is a book of hope. Even though it openly deals with the things that are to come to this world, it was not written to frighten people. On the contrary, it brings comfort to everyone ready to believe biblical prophecies. God will save His children from the greatest tribulation the world has ever known. Until Christ returns, the world will be ruled by a power described by the prophet Daniel as one that will trample, devour and crush the whole world.
The Bible is the compass of truth. The things that take place around us are just the beginning of what is yet to come upon this world. Mankind does not respect its Maker. However, His answer to that is this: “For a long time I have kept silent; I have been quiet as though I were deaf and mute. I have held myself back but now I will shake not only the earth once more, but also the heaven.